The Building of The Witch’s Cottage

After completion of the Boathouse on the lake, the owners were so pleased with the result that in conjunction with architects John J O’Connell it was decided in late 2016 to build a fairytale cottage in the gardens to provide a point of interest for visitors when the estate opened in 2018. Designs were completed and a local craftsman, Joe Murray was appointed to carry out construction together with two local Ballynahinch tradesmen (the same team who built the Boathouse.)

Construction commenced January 2017. The cottage was built using an eco friendly method using a timber frame construction with thermal hemp insulation and Diathonite thermal plaster all supplied by Ecological Building Systems. The building was then clad in waney edge timber which was then scorched to give its dark appearance. The thatch roof was carried out by Master Thatchers North Ltd and took approximately three weeks to complete.

Have you noticed the owl knocker on the large door and the mouse knocker on the small door? These along with the decorative outside light, door hinges and door decorations were supplied by Iron Design Armagh.

Leaded windows were supplied by Stained Glass Studio Armagh and the internal birdcage light was made by a metal craftsman outside Ballymena.

If you peek through the window, you can see the witch’s rocking chair was made by specialist craft person Alison Ospina from Skibbereen, Co Cork using coppiced Hazel with an Elm seat.

The cottage was finally completed January 2018. 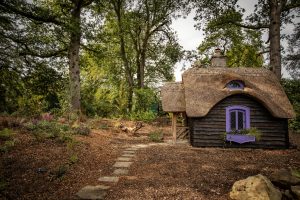 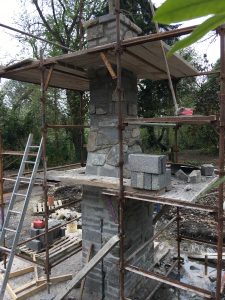 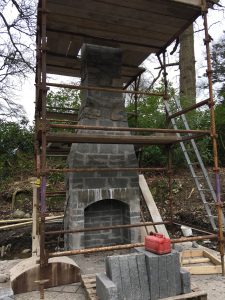 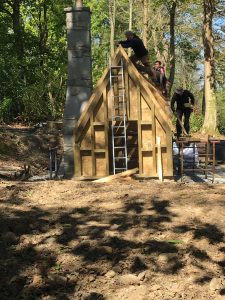 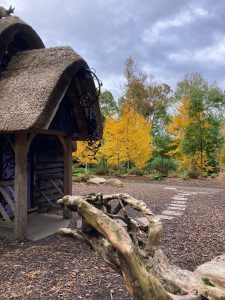